After a week of watching every forecast and preparing for the worst we were blessed with a lovely day for the Brighton marathon. It was cool and dry and the wind felt pretty benign compared to some of my training runs. It was still unbelievable tough and having 6 weeks out and 4 weeks back running really showed in the latter half of the course. It didn’t help that my watch stopped work and I had no clue what pace I was running. It is natural to slow as you get into the second half of the run but you can always keep pushing and up the pace when you see it slipping. Not knowing meant I just let my body do what it wanted but I should be pleased that I made it all the way round.

The crowds were fantastic. Having my name on my shirt was great – it gives you such as lift when people shout out your name and encourage you to keep going. It doesn’t matter if they are friends, strangers or even the odd celebrity  (Zoe Ball) – they all made it so much easier.

I did think on my return from the power station why anyone would want to run this distance and put in all the hours of training and I felt seriously unwell afterwards to the point that I thought I would never run a marathon again. But a week later and with a slight tinge of disappointment that my time (3:48) was not what I was originally aiming for, I think I may have a crack at it again in a couple of years. I would certainly love to join RunBrighton training group again – running with other people was a joyful experience as I normally run on my own. It was nice that when I was cramping up there was Lee from RunBrighton stretching too – he had a lot more energy at the end to showboat for the cameras whilst I collapsed 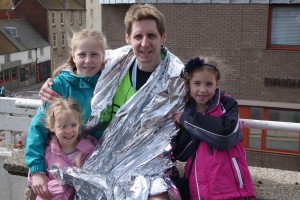