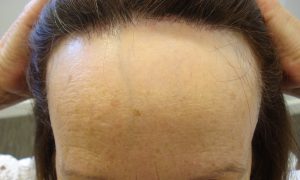 I am often asked about what causes Frontal Fibrosing Alopecia, FFA. Despite being described over 20 years ago now in 1994, we still do not know what causes this condition. We know it is increasing in frequency. We know there are familial cases and some recent genetics research does point to women with the condition having certain genes in common with each other that makes them susceptible. The role with hormones though is less clear. Whilst we do see this mostly in post-menopausal women, we also see in peri and pre-menopausal women. Prior to menopause though hormone levels are changing and the amount of sebum, also produced by hair follicles and possibly important in flushing them out, is decreasing.  This has led hair specialists to question an environmental cause, possibly in a leave-on product that we apply to the skin. The condition does occur in men but much less frequently and when men with the condition were surveyed, all of them used daily facial products as compared to the general male population, where only 20% use a leave-on product.

So what about sunscreen chemicals?  Well, these were developed in the 1970s and introduced largely in the 80s and became very widespread in the 90s. At the time these chemicals were quite controversial and there was concern about possible links to cancer. They are now common ingredients in daily moisturisers, make up, hair serums and other self care products. This has led to exposure increasing massively from the two week holiday abroad to daily, year round. Some recent research has also showed that with daily application the amount of chemicals absorbed into the body builds up quite markedly and we don’t as yet know the biological effect of this. Oxybenzone has now been banned in a number of US states and has been linked to bleaching of coral reefs. These chemicals may also affect hormone levels, although this has not been demonstrated in humans. At the same time, we know that UV exposure is the principle cause of skin cancer.

It is difficult to know what best to advise patients but I tend to recommend:

Avoid daily exposure to sunscreen chemicals by using products like moisturisers without them, unless you are going to be outside for prolonged periods of time*

Use other forms of sun protection eg hats

Use as little leave-on products as possible

* sunscreen chemicals are only required when the UV light is strong enough to cause damage to the skin. In the UK this is the middle of the day 11-3pm from April to September. At other times these chemicals are not needed unless you have a sun sensitivity condition or are travelling abroad.