Research always takes a lot longer to get started than is planned, even if it is part of commercial pharmaceutical trial. You often hear of studies, get given a proposed start date, plan around this and then the dates get pushed back and then pushed further back again. The JAK inhibitor drug trials for Alopecia Areata were initially scheduled to start in the Spring, then June and now it is likely to be an October start. There are going to be two trials that run at the same time. The first one will be for patients that have 50% hair loss or more who have had alopecia for more than 6 months but less than 10 years. The second study will probably allow recruitment for patients who have less severe hair loss (approx 30%) but the amount is yet to be confirmed. All of these studies are placebo controlled, meaning some patients will get a placebo to start with but all patients do end up getting the active drug later in the study. 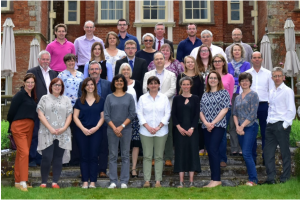 It was great to be part of the Soterios investigator meeting in June, held in a lovely hotel in Hampshire. This company are looking to nanotechnology to treat patchy alopecia using an old drug with modern silicone particle technology. Again it will be placebo controlled, with several active arms using the new topical product in different strengths. This is something you will be able to do at home. It is likely this will also start in the Autumn with a planned October start.

Lastly, there is a study of a new JAK inhibitor versus the latest biologic for severe eczema in a head to head study and this is also starting this Autumn. I am the principle investigator for all four studies so it looks like it will be a busy end of the year. All of these studies will be run out of the research unit at the main hospital in Brighton, currently housed in the top floor of the children’s hospital.

But what about here and now?

In May I was part of an expert panel at the Evidence Based Update on Hair loss. 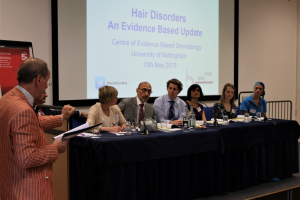 As well as hearing Pfizer present some of their JAK inhibitor data, it was great to hear from one of my French colleagues from Rouen on his study using Methotrexate and Prednisolone combined for alopecia. The doses were far higher than I have used in the past and there was improved benefit from longer term steroid use. Maybe we shouldn’t forget these other cheaper and more accessible options over the new and exciting ones being developed.

Dr Farrant looks after patients at clinics in Brighton & Hove and across Sussex. Please contact his secretary for more information about how Dr Farrant can help diagnose and treat your skin or hair condition.

If you wish to make a private appointment please include your name, contact details and a brief description of the problem and we will aim to respond within 3 working days. If for some reason you do not receive a reply please ring the numbers below.

Please note that all existing NHS patients should make their enquiries to the NHS secretaries on 01273 665019.