The World Congress of Hair Research was held in Miami last month and attracted leading experts from across the globe, bringing together both scientists and clinicians to discuss latest advances. Treatments and research in alopecia areata are always eagerly anticipated and this year I attended hoping to learn a lot more about the use of JAK inhibitors that are being more widely trialled in the states. This family of drugs are being used to target a number of  “auto-immune” conditions, where the body is effectively attacking itself. A couple of drugs are already available for some blood  conditions (myelofibrosis, polycythaemia and thrombocythaemia) and rheumatoid arthritis.

A couple of very small studies using JAK inhibitors for severe alopecia were presented. Whilst claims were made for 75% response rate this was not complete growth. In fact the pictures they showed were rather disappointing. The second study showed a lower response rate of around 60% but this seemed to be dose dependent and with time getting the dose right may lead to better outcomes. On the positive side there were fewer side effects than they anticipated, with an occasional lowering of the blood count and minor gastrointestinal upset. For those that respond it does look like they will need to keep taking the drug in the longer term, although the dose can be gradually reduced and the drug withdrawn.

What was probably more useful for me was spending the evening with Brett King, who has  the largest cohort of patients on these drugs, having treated over 160 so far. 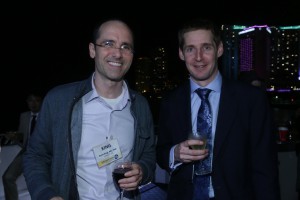 His response rate is around the 75% mark. Some people are slow responders and a longer trial can lead to improvement, even if no regrowth initially. Most people though shows signs of regrowth within 3 months and like other treatments, patients with severe and long standing disease respond less well. He also reported fewer problems than one might anticipate. It is clear that lots of companies are now interested in these drugs and may look to other formulations, such as a topical application, in the near future.

For now the price of these drugs is likely to limit these to most. Costs are likely to be in the range of £1000-£3000 per month for one drug and the other cheaper drug may require travelling to Switzerland or Turkey to pick up a prescription as it is not licensed in the EU. In the meantime an interesting study was presented using Simvastatin and Ezetimibe in Alopecia Areata. These are very widely used cholesterol lowering drugs and price wise at the other end of the spectrum, costing a few pounds per month! This was another small study but 14 patients out of 19 responded = 74% response rate. When the drug was withdrawn in 6 patients, 5 relapsed which would suggest the drug is responsible for t he improvement rather than a spontaneous improvement. Clearly more research is needed but having new treatment options on the horizon is very exciting.